Located 22 miles north of the Golden Gate, San Pablo Bay National Wildlife Refuge sits like a crescent-shaped cap across the top of the bay between the Petaluma and Napa Rivers. Vast stretches of pickleweed marsh, great rafts of ducks and open bay waters have always embodied this refuge. Yet, recent land acquisitions, a dedicated community, and strong partnerships are creating new and exciting opportunities for habitat restoration, wildlife protection, and wildlife-oriented recreation.

The refuge’s story begins in 1974 when it was established to preserve, protect and enhance wetlands for migratory birds, waterfowl, and wildlife. During the past 47 years the refuge has grown from its natal 185 acres known as Figueras Tract located at the northwest tip of Mare Island, to more than 20,000 acres, restoring a vast San Pablo Bay wetland ecosystem that yields benefits not only to wildlife and ecosystem functions, but to the entire community of the North Bay and beyond. The transformation from oat hay ranching and salt production to wetland is being accomplished in concert with many partners, most especially with sister agency the California Department of Fish and Wildlife.

This huge habitat success story was made possible because people from around the bay responded to an early 1980s call for action led by 20 citizens from the city of Vallejo who could not imagine the development proposed to replace Cullinan Ranch’s oat hay fields. In the winter, the oat hay fields provided seasonal wetland habitat for waterfowl migrating on the Pacific Flyway. In the 1980s, approximately 80% of the canvasback duck population stopped to feed and rest in San Pablo Bay and its wetlands. It was the largest wintering site for this species on the west coast.

Cullinan Ranch, a geographically pivotal 1,585 acres stretching for three miles along Highway 37 west of the Napa River, nearly became 3,000 single family homes, 1,500 apartments and condominiums, 1,700 boat slips and 60 acres of commercial facilities. The group “Citizen’s for Cost Efficient Growth” wanted Vallejo’s development confined inside city limits east of the Napa River because they knew that if city services such as water and sewers were extended across to the river’s western side, a development domino effect between Vallejo and Novato would have ensued.

Instead the community made their voices heard by local government, raising concerns with the Planning Commission, the City Council, the County Supervisors and Local Agency Formation Commission; all to no avail. The development was to move forward. Only one alternative remained, to file a lawsuit based on inadequacies in the Environmental Impact Report (EIR). The successful lawsuit cost the group over forty thousand dollars raised from donations contributed by organizations such as Save the Bay and people from far and wide. Even though attorney Clem Schute won the lawsuit, winning merely meant that the City and the developer could fix the EIR and move forward.

The group realized that the only way to protect Cullinan Ranch from development was to purchase it from the Japanese corporation that owned it. The group turned to then Congresswoman, now Senator Barbara Boxer, who secured seven million dollars in Land and Water Conservation funds for the purchase of the 1,585 acre Cullinan Ranch. In 1991 the U.S. Fish and Wildlife Service accepted the ranch as an addition to the San Pablo Bay National Wildlife Refuge.

Habitat restoration at Cullinan Ranch is a slow, but steady transformation from agriculture to seasonal wetland, with a goal of restoring tidal marsh on the former ranch. Buildings were demolished and materials removed, a non-native eucalyptus grove was cut down, and the oat hay cultivation, which had continued for some years after the title transfer, was finally terminated when the pumps were “unplugged.” Soon afterwards, seasonal wetlands grew where the oat hay had been.

Passive restoration was followed by earthmoving in 2012. To accelerate habitat diversity and revegetation, dredged material was imported and placed at the eastern end of the site to counteract subsidence caused by decades of pumping to drain the soils for agricultural use. The dredged material is good for growing pickleweed as habitat for the salt marsh harvest mouse. In addition to habitat features, construction included a 3,900 foot-long levee to keep State Route 37 from flooding, and recreational features. Recreational facilities were constructed to facilitate public enjoyment of the spectacular views and wildlife, water access on a universal access fishing pier, a kayak launch dock, and a mile-long hiking trail. The final step in Cullinan Ranch’s transition, from seasonal wetland to tidal action occurred in 2014, when four breaches up to 240-feet wide were cut through the levee between Cullinan and Dutchman Slough, returning tidal ebb and flow for the first time in more than a hundred years. 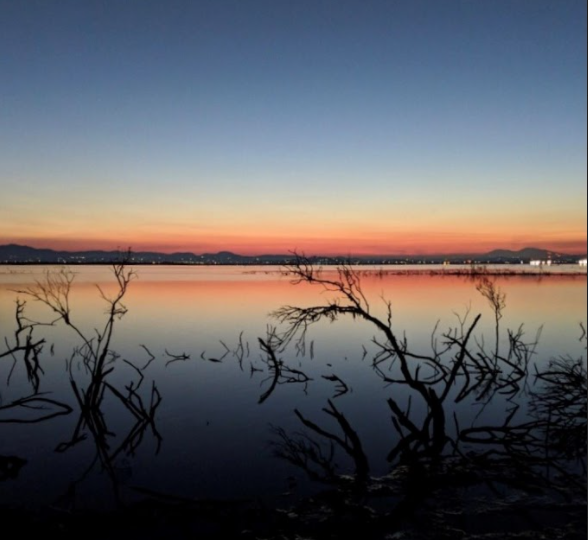 San Pablo Bay National Wildlife Refuge has nearly doubled in size since the addition of Cullinan. The refuge’s land acquisition and habitat restoration are targeted towards replacing habitat for the salt marsh harvest mouse and Ridgway’s rail which became endangered due a loss of 85% of San Francisco Bay’s wetlands. Monitoring data collected by refuge biologists suggest wildlife species have benefitted. Small mammal monitoring at 11 refuge sites, between 2003 and 2013 suggest refuge lands support a sustainable salt marsh harvest mouse population. Monitoring for Ridgway’s rail, black rail, Virginia rail, and sora has shown that although rail populations fluctuate through the years, on average they have remained stable. In addition there is an indication that restoration construction in 2009 may have improved rail habitat at the Tolay/Tubbs enhancement site because the number of rails observed during monitoring has been similar to or greater than at unrestored control sites.

San Pablo Bay National Wildlife Refuge’s wetland restoration sites continue to evolve. As former diked lands begin to receive tidal flow, raw materials such as sediment, water, and an assortment of plants enter the restoration site. However, the tides are non-selective, floating in both native and non-native intertidal wetland plants which can propagate via seed, roots and rhizomes and by division (broken off plant pieces). Biologists have tackled the problem of non-native plant species establishment on multiple fronts, including invasive plant removal and propagating and planting native plants.

Habitat restoration would not be as successful nor as cost-efficient without a local place to propagate native plants. A greenhouse was built by volunteer Lowell Sykes to grow ecotone plants (where the wetland transitions to upland) and other native plants to combat the spread of invasives, and to provide additional habitat for wildlife. Ecotone plants were particularly important because this area is particularly prone to invasion by non-native plants. The ecotones provide high tide refugia critical to the survival of marsh-dwelling wildlife, including the rail and mouse. A partnership with STRAW (Students and Teachers Restoring a Watershed) provided staff to operate the greenhouse to propagate, grow, plant and maintain over 2,000 plants of 12 species. STRAW also recruited classrooms to aid in the planting of native plants on the refuge.

If Cullinan was the cornerstone of the north bay wetland restoration, the more recently acquired 4,300+ acres comprising Skaggs Island and Haire Ranch are the central core of the north bay’s watershed scale, ecosystem restoration. Skaggs Island, a former naval facility, came available via the Base Realignment and Closure process in 2012; its acquisition facilitated by the long-standing efforts of Representative Lynn Woolsey and unflagging citizen support organized by local Audubon chapters.

Skaggs Island is known for its diverse raptor community. Surveys note nesting Swainson’s hawks on Skaggs Island in 2012 for the first time in Sonoma County since the 1970s. In addition red-tailed hawks, American kestrels, northern harriers and great horned owls also nest at Skaggs. Short-eared owls use the island for foraging during migration. Not to be out-shined by birds, there is a steelhead run in Sonoma Creek that flows around the western side of Skaggs Island. The refuge is exploring numerous possibilities to determine the best way to improve, maintain, and showcase Skaggs Island habitats.

One reason for the refuge’s success is the practice of maximizing partnership synergy with numerous groups including the small but solid Friends of San Pablo Bay National Wildlife Refuge. Established in 2003, the Friends support the refuge by assisting with grant management and through outreach. The Friends’ unique contribution to environmental education is the publication of two children’s books: A Home for Salty, the endangered salt marsh harvest mouse and Sardis and Stamm about the endangered Lange’s metalmark butterfly that only lives at Antioch Dunes NWR. Both stories describe iconic species, endangered due to habitat loss associated with human impacts and for which there is active habitat restoration in national wildlife refuges located on the perimeter of the San Francisco estuary.

San Pablo Bay’s estuarine location where the river’s fresh water mixes with salt water from the Pacific is key to its ecosystem value and human wrought change. Over a century and a half ago sediment washed out of the Napa and Sonoma valleys and Sierra Nevada Mountains by the gold mining 49ers decreased water depth, increased wetland area, followed by wetland diking and draining for agriculture and salt production. San Pablo Bay National Wildlife Refuge’s first 47 years has been spent building a world class National Wildlife Refuge anchored in partnerships among agencies, Friends groups, and a plethora of supporting non-governmental organizations. Together we have re-established an ecosystem with the connectedness required to support and sustain healthy vegetation communities and robust wildlife populations, preparing them for the 21st century, enabling them to navigate sea level rise and other landscape scale change in the largest estuary on the west coast of North America.

For more information see the US Fish and Wildlife page here.